Home Away From Home :: the book + the buzz 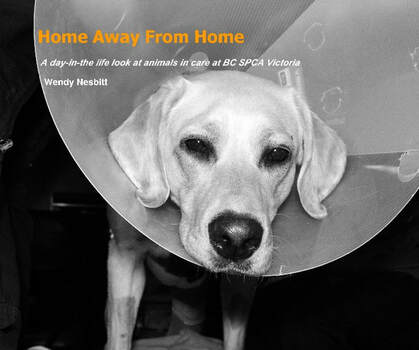 my very first self-published, self-promoted book in which 100% of the money I raised went back to the rescue raised almost $2500!
a hard cover, 100 page, full colour book isn't cheap to produce - so I'm stoked I could raise this much!
it was truly a labour of love... I have no idea the number of hours I spent at the shelter or at the emergency vet, but I do know I skipped work a lot to hang out at these places with my camera

SpookyBug; your book is beautiful. Art evokes emotion. Without emotion it isn't art . Your book is art and I love it. Good girl xox
- Jennefer B

I'm just so impressed and touched by the book and YOU Wendy...the time and effort involved and just your sheer LOVE for all animals!!
Thanks for that :)
- Karin K

It's beautiful Wendy! I can't wait to sit down with the book and some good, uninterrupted time to read all the stories.
- Bronwyn ​

Hi Wendy!
Just wanted to let you know that the books were waiting for us at Darryl's office when we got back from Maui!  They are even more beautiful in person!!
you are THE BEST!
xmooches,
Renata
- Renata, Saskatoon, SK

pt 2: Wendy! You are amazing!!! I cried looking through your gorgeous book... Thank you, THANK YOU, for doing this for animals! I will be buying several books myself and have spread the word! (((HUGS)))
- Renata

Congrats on such a great endeavor Wendy - we are both so very proud of you!
- Heather R

Local media in Victoria is amazing. High Paws go out to Adam Sawatsky for highlighting my book on both the CTV news and his Eye On The Arts program on C-Fax radio, Dan Kahan at ShawTV's The Daily, and Adam Sterling at C-Fax Radio for giving Penny Stone and I a whole 30 minutes to plug the book! Sorry, no copies of the radio stuff, but here's the TV press!

snippets from the project 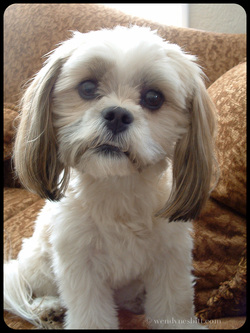 It all started with Suzy, the little muffin of a dog my husband and I adopted from the Victoria SPCA back in 2005. Now, after six years of volunteering with them doing everything from Humane Education presentations at elementary schools with Suzy at my side, helping put on fundraisers and walking lots of dogs, I decided to do something with all of the photos I've amassed over the years from being around the shelter. So with camera in hand, I've been hanging out with the animals, trying to capture what their days are like while in the care of the shelter. From breakfast to walkies, vaccinations, births, cuddle time, surgeries and everything in between, I want to share with the public, all that goes on behind-the-scenes and the amount of care that the staff and volunteers to put into each and every animal.
My main objective is not only to show off some amazing furry, fuzzy, fluffy & feathered friends, but to bring awareness and (hopefully) some much-needed funds to the non-profit who does so much to help the animals in need in Victoria. And 100% of the proceeds of this book go directly back to the Victoria SPCA.

Here are a few snippets from the book-making journey... 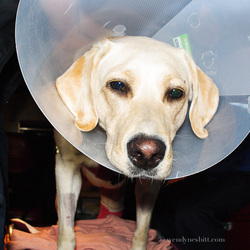 Bella was spooked by fireworks on halloween and was subsequently hit by a car. With a broken pelvis and fractured leg she was rushed into vet care and stabilized. It turned out she required some specialized orthopedic surgery. So a call was put out through local media and enough money was raised to send her to Vancouver to get the surgery! Two operations later she's now in her new home and getting along well with both her two & four-legged housemates.

left: bella arriving to her new home after her surgeries - she'll need help walking with a special harness while she heals. 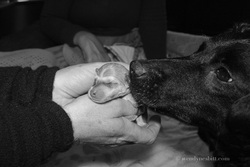 Luna came into the shelter after being rescued from an unfit home.... and she was pregnant. A foster home was found for her so she could give birth in a more comfortable setting. Within days she gave birth to eight healthy pups but due to lack of care while she was pregnant, one sadly passed away at only a few days old. R.I.P. "Little One" (not pictured) 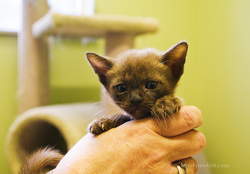 This may be surprising, but I'm actually a little afraid of kittens - yup, we're talking about the same soft little cuddle balls. I come by it honestly though because I'm allergic to them and somehow they just know. If I get scratched I totally welt up and turn into a sniffling, runny-eyed mess. Years ago, while I was doing some work at a friend's house while she was out, her little kitten who must've known about my allergies, came at me from all angles - especially when I would least expect it. She would jump from windowsills, hop up on the table, or just cling to my pants (even when I was walking around)... and her little claws were like daggers, piercing me all over my body... So now, since I've been around the young 'uns for the book, I'm trying to regain some trust, but I'm just waiting for someone to make a horror movie about little kitten dagger claws.... it's only a matter of time... 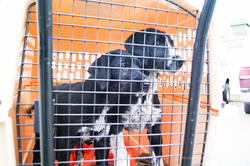 There's no shortage of dogs & cats in need of homes and I find it amazing how just when you think that the whole spay/neuter message is getting across, you realize it's not. I think ultimately people just don't realize the number of animals not just in the world, but in this country, province and this fair city, that are in need of good homes... safe homes... loving homes. And sometimes the circumstances are such that even though the home is trying their best to look after their furry family, there comes a point when they're overwhelmed and don't have the resources to spay/neuter the animals in their care to stop the reproducing. For this, I am really sad. In a perfect world, there would be free spaying and neutering of family pets (as well as more mobile vets to remote areas and affordable vet care) but in the meantime, there are organizations that can help find new homes for people who just can't care for their animals any longer ...  and that's part of what the Victoria SPCA does to help - their current manager is incredibly passionate and  will spend her days off to drive hundreds of miles on roads that don't really exist, over bridges that are condemned, and through snowstorms to answer a call for help. Today I photographed a few cutie pies who were rescued last week. 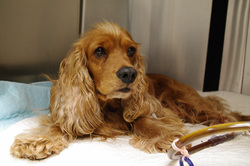 When I woke up in the middle of the night last night I remembered two more shots I have to get for my book. It's not the first time I've woken up in the middle of the night and let my mind dwell on this project and what, if anything, I've forgotten, but as soon as the book goes to print, I hope it doesn't happen again!
I've got the title, the front & back covers and the insides basically done - just a few tweaks and off it'll go... exciting and terrifying. But now I'm realizing that this is a project that although this part of it - the behind-the-scenes look - may end, I don't think I can stop photographing the animals that are coming through the shelter and helping to highlight and educate what is going on here, not only in Victoria, but all over the world. Animals are being neglected, mistreated, and forgotten about and they need us to speak up for them... because those that are fortunate enough to make it to a shelter or rescue are troopers in their own right.

So speaking of troopers, earlier this week I got some very sad news. A little dog I knew (who I'm going to call Trooper) that had been living on the streets with a panhandler who was a known schizophrenic was signed over the care of the shelter late one night. The story given to the shelter was that he was hit by a car. A friend working at the shelter knew I had known this dog so she notified me and rushed to the vet where he had been taken the night before. I wanted confirmation. It was him. He was hooked up, stabilized and on a lot of pain meds. This dog who had known me as the treat person and came for pets when his human allowed him. I had watched this dog go from a tail-wagging pup to an emotionally broken dog. He slowly became more hand shy with me. He was wary and weary. I had spoken to APOs and although it was known that his human wasn't taking his prescribed medications, there wasn't anything they could do. As I photographed him at the vet it broke my heart. Here was this little guy who had spent his last couple months in this world watching his human decline and spending his days in the cold, wind and rain helping someone beg for change. I suppose the solace I could take was knowing that his last two nights on this earth were spent in warmth and without pain. His broken bones and internal injuries proved to be just too much for him and he was helped to peacefully pass that evening.
Although all the animals that I have encountered through this project are special in their own ways, some have touched me a little bit more.
Trooper was cremated and his ashes were given to me, along with his paw print. They are a constant reminder to keep advocating . To keep doing what I can so that Troopers of the world, and all the other beings in the animal kingdom whose lives get cut short, get to head to the big farm in the sky where their spirits can run, play, and be themselves... without a care in the world.
R.I.P Trooper, my friend. 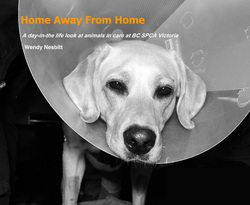 Choosing the cover photo was tough because in my eyes, all the animals I photographed are deserving. But then it came down to the feeling I get when I see this photo. Remembering Bella's story and the outpouring of support from people not just in Victoria, but in BC, the US, and there was even someone in Alaska, who came forward and donated to help pay for the specialized surgery she needed to mend her broken body. It reminds me to have hope and remember that as a society we can make a difference in the lives of shelter animals. 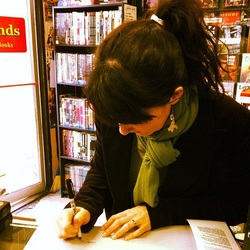 first book signing! photo: gareth @ legends
Created book: check
Launched book: check
Promoted book: check
Had my first book signing: check
Sold some of said books to help animals: check
Now what?
I'm going to keep promoting this book and all the while I'm going to continue to take photos of shelter animals because I want to make sure that they and their stories are not forgotten. And although I am continuing to work with the Victoria SPCA, I hope that this book inspires other people to help shelter animals in whatever way they can, wherever they are - because as a society we all have the ability to speak up for them... we just need to do it.
And who knows what project will come out of this next round of photos... guess you'll just have to check back to see!